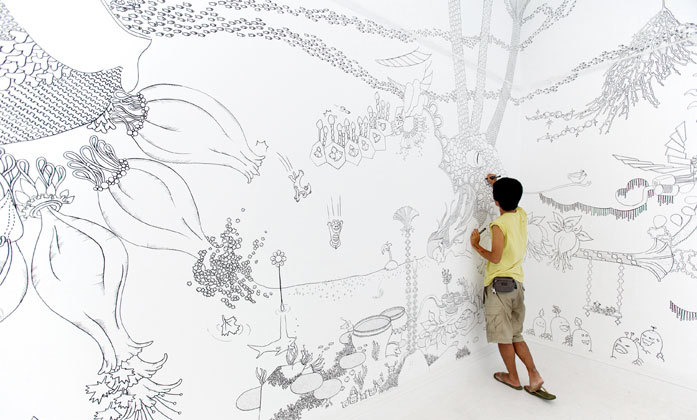 Yoshi Sislay and Genta Kosumi define themselves as omnivores. In an organic way and without prejudice they acquire techniques and references from here and there spontaneously: “We come from a world where everything is possible. When we were children at school, we heard Beethoven, we admired Picasso’s work and wanted to be Samurais. After school, between rice fields, we played baseball or soccer, and at home with our Nintendos or reading comics. We prayed on the altar of Budha and we ate hamburgers with chopsticks.

Instead of seeing it as an inconvenience, these two youngsters from Osaka claim the opportunity to choose among the different everyday referents that have been modeling the iconography of their country during the last 50 years. The result of this work adjusts more to the reality of a country considered a paradigm of current globalization, than to the classical and stereotypical representation of the Japanese country based on the image of Mount Fuji or the trend associated with Japan chic. From Sony to Francis Bacon, going through Sex Pistols, Manga, Miró or the universe of video games, the visual references of the young Sislay and Kosumi are multiple and far from nationalities.